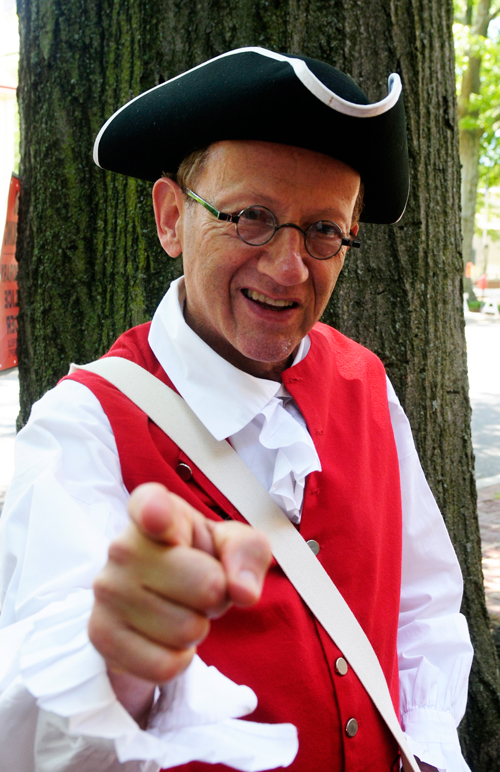 Auditions to be held end of January and early February.

HADDONFIELD, NJ – The Indian King Tavern, where New Jersey became a state in 1777 and now provides invaluable educational programming as a museum, is auditioning Town Criers for their Annual “Skirmish” between the British and the Colonists to be held Saturday, June 6, 2020 throughout the streets of Haddonfield.

Often referred to as the Social Media of the 1700’s, Town Criers were a main form of communication of important information to citizens. They made public announcements in the streets and often dressed elaborately, in a red and gold coat, white breeches, black boots and a tricorne (three-cornered) hat. They rang a handbell, as they shouted, “Oyez, Oyez!” before making their announcements. The word “Oyez” means “hear ye,” which is a call for silence and attention.

The Criers will play an important role on Saturday, June 6 when time will be rolled back to the Revolutionary Era when the Continental “rebels” and the British Red Coats battle with muskets along Kings Highway in Haddonfield, NJ.  The annual “skirmish” is hosted by the Friends of Indian King Tavern, a 501(c)(3) non-profit organization that works to preserve and advance the Indian King Tavern Museum, the first New Jersey State historic site, and raise public awareness of the museum and its educational programs.

In addition to the battle, the day will be filled with lots of activities such as singing pirates, yelling contests, strolling historical reenactors, caricature artists, redcoats looting and pillaging, music, food, giveaways and many other exciting events. Details will be forthcoming on the Friends of Indian King Tavern website indiankingfriends.org and on Facebook. Sponsorships are now available. To date, TD Bank and Jefferson Healthcare are among the top sponsors for this community wide event that draws thousands of people. The event is free and open to the public.

Those interested in being a town crier should contact Philip Zoebisch at pszoebisch@gmail.com now. If you would like to sponsor the event or a portion of it, contact The Skirmish Committee Chair, Joe Murphy at jemurphy5730@gmail.com or the Event Publicist Kris Parsons at Kris@parsons-pr.com.

The Indian King Tavern Museum, is a 260-year old, state-owned historic site.  It is where New Jersey became a state and its Revolutionary War legislature met. The Skirmish, now in its 7th year, is a public celebration that marks the re-enactment of the type of skirmishes that took place in the historic town of Haddonfield, leading up to the Battle of Monmouth in June of 1778.The Indian King Tavern Museum is located on 233 Kings Highway East, Haddonfield, NJ 08033. For more information about free tours and educational programs, call 856-429-6792 or visit indiankingfriends.org